I think I'm doing better, but I frequently have moments of ... well, not-so-better I guess.  I enjoy having my nails done, but I'm not really enjoying doing them ... still behind on the blog ... and periodically going through black moods, which is always when I seem to write more & maybe even better?  I've never had a happy poem I like as well as my dark poems.  And sometimes they're literal, and sometimes they're more metaphorical - you're welcome to take it in whichever way it speaks to you.

Speed bumps like mountains in my path
So much pain, and fear, and wrath
Looking down ... contemplating old scars
Distant - it's been so many years
And yet ... the thought is there, the urge
To purge with blood instead of tears
I wrote that sometime last week, although I didn't date it so I'm not sure exactly when.  But I thought I'd post it up because it's been such a long time since I put up any poems.
Thanks for reading.
~Colette
Posted by Colette at 3:55 PM 5 comments:

Well, if you've read my rant on my main blog, you know why this didn't get up before Thanksgiving LOL.  In addition to that, this new wide screen & HD loveliness has a very un-lovely side effect - a ridiculously long upload time.  So between converting, editing, publishing, uploading, blah blah blah the process is a lot slowed down compared to how I used to operate.
On a side note - all the camera/computer drama also took up the time I was going to be researching recipes & cooking - and I committed the sin of purchasing a pie for Thanksgiving.  Oh, the horror!  It was still handmade - just not by my hands LOL.  My Minneapolis followers may know of the 50's Grill - it was a mob scene Thursday morning, people picking up multiple pies for the big day.
Thanksgiving was a bit subdued but nice.  I'm looking forward to Christmas & most of all to cookie day =)  Not to mention lots of holiday nail art!  And to get you in the spirit - here's at "my" tree all decorated at grandma's house (we started it out in a bucket when I was a kid & now it's probably like 15 or 20 feet tall!): 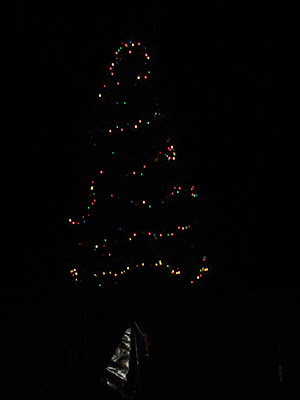 Thanks for reading.
~Colette
Posted by Colette at 1:01 PM 4 comments:

Things have been pretty mild around lately, since I started vlogging ... really even my vlog about depression, I was in a pretty good mood when I recorded it.  But I don't foresee a time when I'd be able to talk about this & not be strongly affected.
There's no way to make death an easy thing to deal with.  There are perhaps times it is less difficult, but even when it's expected, there's something about it that's a shock to the system.  My grandpa was 84 years old, had outlived all 6 of his siblings, countless friends, and even one of his grandchildren - he himself was ready to go but none of us left behind were ready to lose him.
I credit him with my love of reading - when my parents first came back to this state they lived with them, and he would read to me every morning before he went to work when I was not much more than a baby - just old enough to grab a book & run out to him.
Some of the smallest things bother me ... I had an eye appointment yesterday, & it was hard because when he worked he was in the industry, and he always liked to see my new glasses.  Even blogging is a little difficult, because he was absolutely my biggest fan.  He would always want to see what was on my nails - but if there'd been a blog post, he'd already seen them.
I am not back to normal.  Things really aren't normal anymore - but all I can do is go on until this new situation becomes normal.  There's no telling how long that will take - but whatever the tragedy, it always eventually does happen.
Thanks for reading.
~Colette
Posted by Colette at 6:23 PM 21 comments:

Currently Outside My Head

Contributors (Me & Myself LOL)